Using vimdiff as a git mergetool can be pretty confusing - multiple windows and little explanation. This is a short tutorial which explains basic usage, and what the LOCAL, BASE, and REMOTE keywords mean. This implies that you have at least a little bit of basic vim knowledge (how to move, save, and switch between split windows). If you don’t, there’s a short article for you: Using vim for writing code. Some basic understanding of git and branching is required as well, obviously.

Prior to doing anything, you need to know how to set vimdiff as a git mergetool. That being said:

This will set git as the default merge tool, will display a common ancestor while merging, and will disable the prompt to open the vimdiff.

Let’s create a test situation. You are free to skip this part or you can work along with the tutorial.

That’s where we get a merge error: 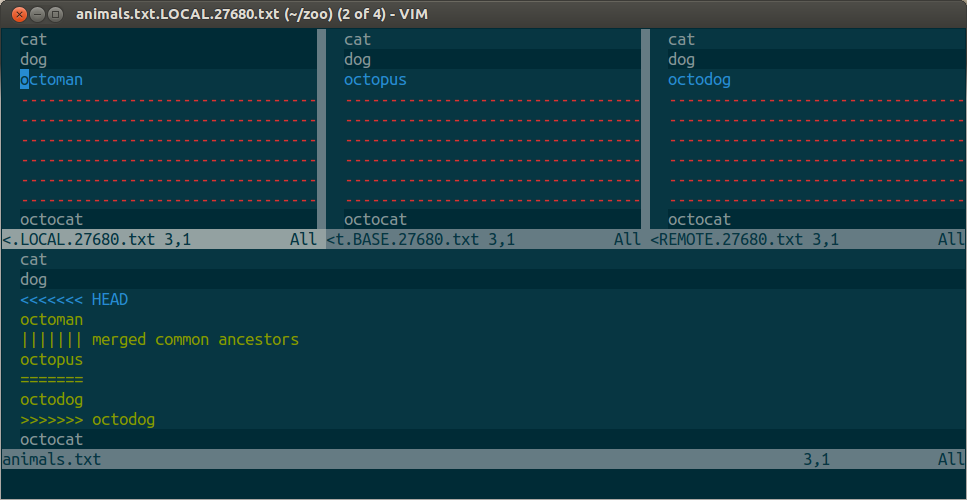 This looks terrifying at first, but let me explain what is going on.

From left to right, top to the bottom:

LOCAL – this is file from the current branch BASE – common ancestor, how file looked before both changes REMOTE – file you are merging into your branch MERGED – merge result, this is what gets saved in the repo

Let’s assume that we want to keep the “octodog” change (from REMOTE). For that, move to the MERGED file (Ctrl + w, j), move your cursor to a merge conflict area and then:

This gets the corresponding change from REMOTE and puts it in MERGED file. You can also:

Save the file and quit (a fast way to write and quit multiple files is :wqa).

Run git commit and you are all set!