I just found my financial records going back to 2013!

I know that doesn’t sound exciting, but for someone who loves putting together spreadsheets this is a treasure trove of information! Well, maybe not a trove, but a sizable chunk of data. I only have two numbers for each month – income and expenses. But that’s just enough to calculate my savings rate!

It’s smoothed out using a 6 period rolling window, as it’s near impossible to see trends when plotting raw numbers. 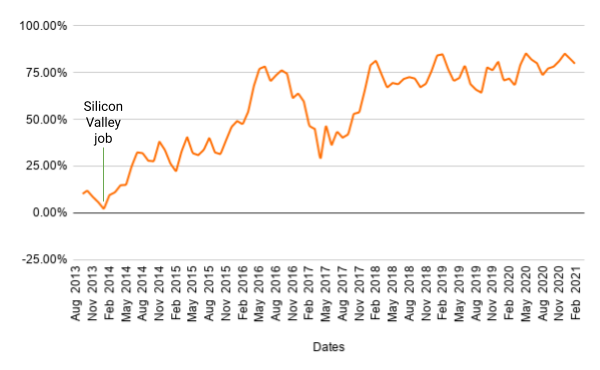 By the end of 2013 I lived in downtown Philly and was working as a freelance software developer. Per-project pay was decent, but the gaps between contracts reduced the overall income. That, and being a sole breadwinner for a family of two – the funds were running dry and we were living paycheck-to-paycheck.

My then-SO and I had different financial upbringing. My ex-wife and I were both young when we got married, and we’ve never sat down and talked about finance – so I could only guess as to what her relationship with money was. I came from a household of a frugal single mother – we were never short on cash, but the expenses were low. In a rural community food was grown in a large garden, milk bartered from a neighbor, sweaters knitted.

I distinctly remember my partner not having more than a couple of hundred dollars in a bank account when we moved in together. On the other hand, by the time we got married I amassed a nest egg - nearly $20,000. Granted, it’s small in the grand scheme of things – but these were the savings I put together from working low wage jobs – before I learned software development.

You can see us deplete that fund by the end of 2013 and into early 2014. And paycheck-to-paycheck we lived.

In January 2014 I was offered a position with a software company in the Silicon Valley. Things were looking up for our financial life! My then-wife and I moved to a Bay Area suburb.

It took some adjusting after living in downtown Philly. Both our income and expenses increased. Thankfully with the new job we found it harder to keep up with the increasing income: that’s where we settled for the 25% savings rate. A balance between frugality and spending habits. 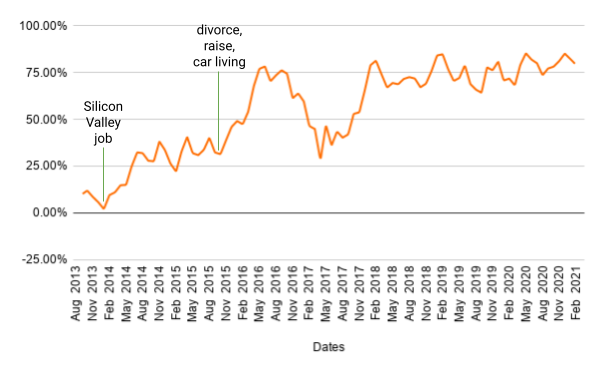 A marital disaster struck at the end of 2015: my now ex-wife and I split up. What was a downturn in life turned out to be a financial upturn for me. My ex moved back with her parents, and I stayed in the apartment we were renting.

In a bout of coincidental timing, the apartment complex I lived in was scheduled for demolition. I had to move out and look for a new place. Instead, I decided to move into my car. I wrote about that in detail before, if you’d like to read about that.

This is when I became interested in the FIRE movement. If you’re not familiar, “FIRE” stands for “Financial Independence, Retire Early” (I like to think everyone is aware that this is a terrible acronym). The idea is to increase income, drastically decrease expenses, and invest the difference into index funds to live off of indefinitely.

Now that I had an idea where my money can work best, I had an easier time justifying increasing my savings rate. FIRE also turned increasing savings rate into somewhat of a game.

Finally, I negotiated a chunky raise at work. I was underpaid by the Silicon Valley standards, and “I like working here, but I need to be paid X or I quit” tactics worked. Having a reputation for being a high performer no doubt helped.

It’s not surprising that as a culmination of those events, this is where you can see my savings rate beginning it’s climb to a respectable 75%. Occasional spousal support would bump up the expenses, but not having rent to pay and a higher salary made it easy to absorb those expenses. 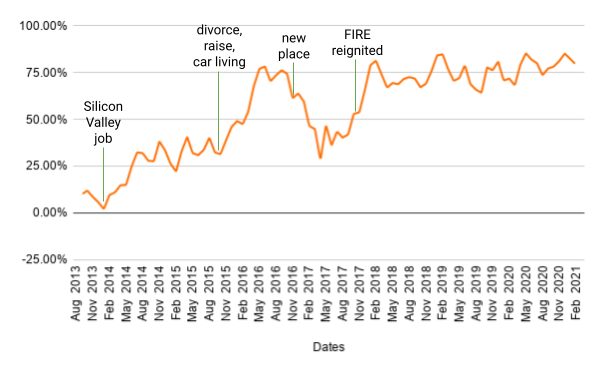 By the end of 2016 I got my dream job at Google, and moved into a new studio apartment. No, the big dip isn’t just a new place, but it’s strongly connected. I decided to make up for a year of living out of a single suitcase. There’s furnishing the new place from scratch, top of the line gaming PC, a VR headset, and so many things I didn’t need! I definitely went on a bender.

It took me a year to slow down. This is also where my then-girlfriend and now-forever-housemate became more open with me financially: I happened to meet another FIRE enthusiast out in the wild, completely by chance. She reignited my desire to live frugally. End of 2017 was marked by me donating and selling an ungodly amount of things I accumulated over this year, and returning to comfortable living within (or below, depending on how you look at it) my needs. 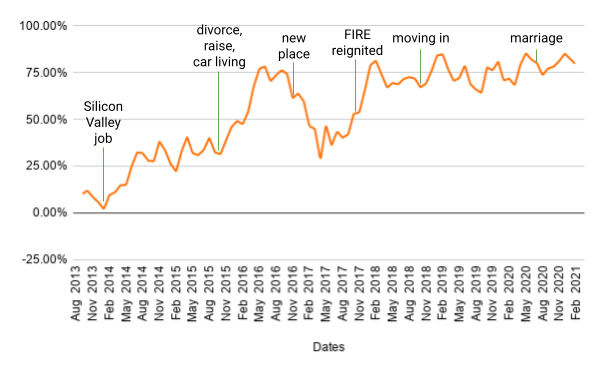 We moved in together by the end of 2018 and married in 2020. We still keep separate accounts for ease of accounting, and this chart only displays my data for the sake of my partner’s privacy (it’s less work to chart too). Overlaying my SO’s data after combining our finances doesn’t meaningfully change the numbers you see above.

It’s not realistic for us to push the savings rate higher without sacrificing the luxuries we enjoy - like travel or occasional high end dining. So here we are, at a comfortable 75% to 80% savings rate.

My wife and I earn 7 times more than I did when I was a sole breadwinner. Our joint expenses are 60% higher than what my ex wife and I spent 8 years ago. Both my wife and I are in a priviliged position to be high earners in a high paying industry. We’ve gotten extremely lucky where many wouldn’t have.

There’s no real purpose to this post other than sharing my journey. Hope you found something of interest!