I have set on my journey across the United States and back a few months ago. It’s a fun thing to do, and really gave me a breath of fresh air. I watched elephant seals and whales on a California coast, spent what felt like days stuck in LA traffic, ran from a blizzard, made it through a flash flood, passed a tornado, celebrated New Year’s on the road…

But don’t let me get ahead of myself. 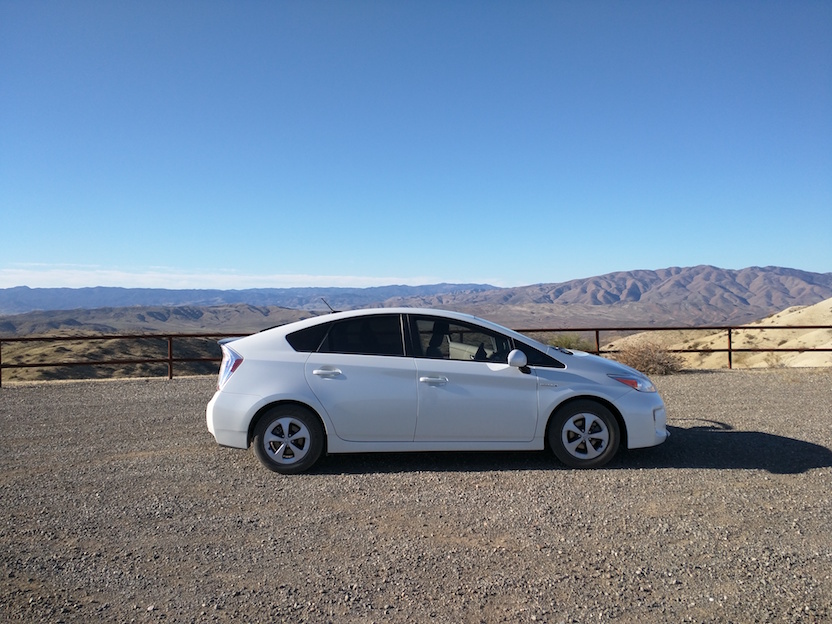 My path started in San Francisco Bay Area, a place I’ve been lately calling home. I tried out living out of a Prius before, thus not having a sturdy place to call home wasn’t really a shock. After only a few weeks I didn’t feel like anything is out of place - being on a road feels just as normal as renting a house.

First - the packing and organization. Just like in any living space, zoning is important. Space inside a car is separated into 5 major areas: 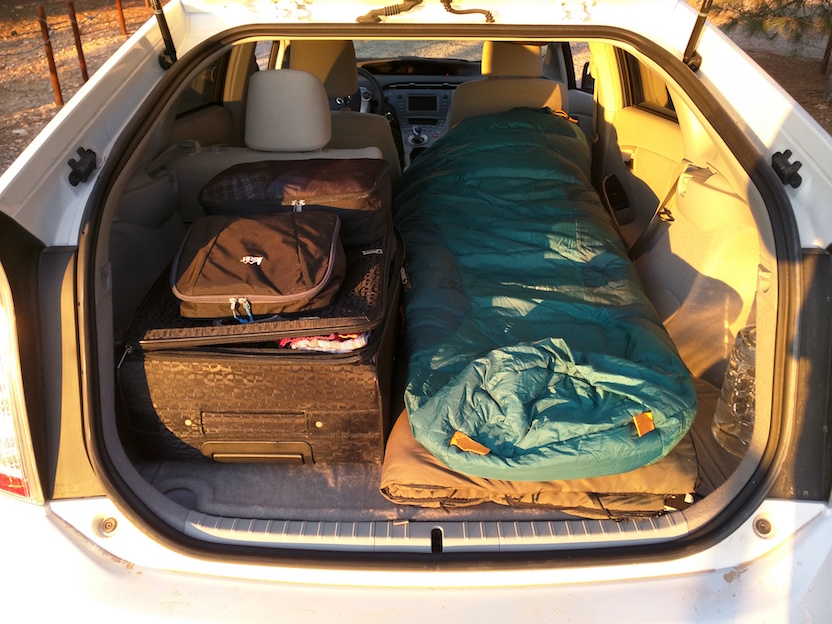 After about a week, moving between the areas within a car becomes surprisingly easy and natural. I usually put on a hand brake, lock the car, leave my shoes in a driver’s seat and move to the back sit or the bed.

Being prepared is essential for living on the road, so I keep a lot of food and water in the car. I make it a rule of thumb to keep 6-8 3-liter water jugs in the car, which amounts to 18-24 liters (5-6 gallons) of drinking water.

For boiling water I use RoadPro Smart Car Pot. I’ll upgrade to something better eventually, since it requires me to plan too far in advance - it takes 20-25 minutes to get water to boil.

I also have teabags and coffee with me. I used to have instant coffee, but it tastes terrible compared to the real thing. Now I use a simple one-cup coffee maker (the one where coffee drips through a funnel) to brew my pre-ground coffee.

When it comes to food - I use rice, grains, and pasta as a base for some meals. Canned goods like corn, peas, mixed veggies, pasta sauce, or chili add a nice touch to the base. I heat up canned soups with a backpacking stove when I’m not in the mood for cooking whole meals or doing the dishes.

I have a 16-qt Stanley Adventure Cooler which keeps items inside cold for nearly three days (or practically indefinitely if I’m up in the mountains where it’s cold). When I’m preparing to be out in the wild, I fill it up with eggs, meat, cheese, veggies, fruits, and berries.

In addition to everything listed above I always carry 6 days worth of MREs and water in an emergency backpack underneath in the cargo compartment in case I am ever stranded somewhere.

For cleaning my cookware I’m using a backpacking approach I’ve read about on WikiHow. I spray the dishes with some natural cleaning solution, let them sit for a bit, wipe it off with paper towels, and then thoroughly rinse degreased dishes off in a 5-liter travel kitchen sink.

Most of my clothing is pretty regular - pants, T-shirts, shirts, cardigans, sweaters, jackets. However I did switch to using merino wool for all my base layers: underwear, socks, compression tops and bottoms. While being significantly more expensive, merino wool is much more comfortable to wear, and it stays clean for much longer than normal clothes.

All the things I wear day to day fit in a backpack. When I stayed in New York City for a few weeks without a car I had everything I needed in it: 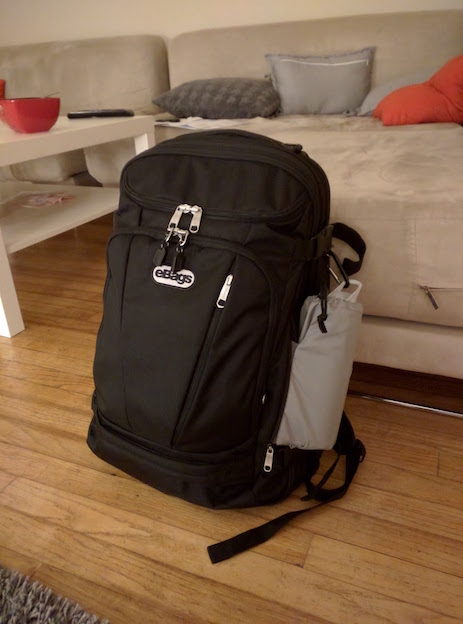 In addition to all of the above, I carry a few pairs of shoes and an additional outer layer I wear when I anticipate to be near a campfire. That goes in a storage bin under the bed.

I started with visiting laundromats and just carrying a lot of coins with me. But after a while, a number of items which require hand washing or delicate care have increased - mostly due to above specified merino wool base layers.

I’ve been looking for an excuse to try out Scrubba wash bag I’ve heard so much about - basically a dry sack for washing clothes. I found it to be quite convenient and not at all cumbersome to use.

While I still use laundromats for washing bulkier items, I hand wash my easy to clean and quick to dry base layers.

A self-inflating sleeping pad and a winter queen-sized sleeping bag folded in half create a great mattress. I sleep in a summer sleeping bag, with an added sleeping bag liner and a few travel pillows.

I run AC in the car throughout the night. While keeping the temperature pleasant, it tends to dry out the air and results in a major case of a sore throat in a morning. I use a small travel humidifier which connects to a USB power supply to regulate the humidity in the car at night.

Boredom seems to never be a concern with this lifestyle. I use laptop for rare acts of writing, and a Kindle for reading during the little downtime I have. I also have a little harmonica I hope I’ll learn to play one day. And some juggling balls I throw around once in a while.

A few words on stealth

While I enjoy staying at campsites, a large portion of my journey involved staying in urban areas. Looking inconspicious is a big deal when you’re relaxing in a car - it’s not fun when somebody comes knocking on your door (didn’t happen to me though). 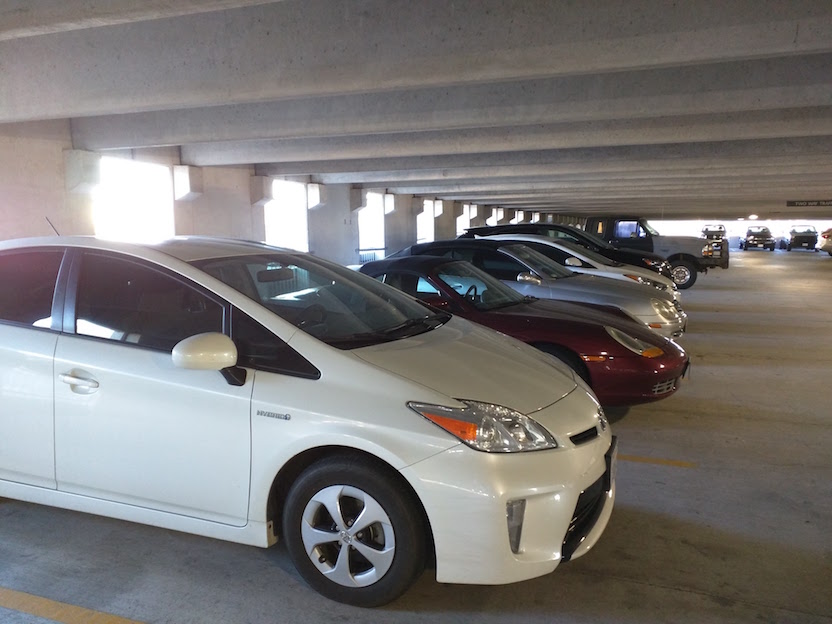 The fact that it’s a white-ish Prius helps a lot. Car dwelling is not a first thing people think when they see a tiny city car parked on the side of the road. Tinted windows (heavier tint in the rear, lighter in the front) are enough to shield the dweller from the passers by. A blackout curtain separating the front seats from the back area and covering rear windows is enough to cover one from curious eyes peering inside the car.

Here’s how the car looks in ful lighting with the curtains down, if you look closely you can see the black fabric behind the seat backs. But most likely you’ll just pass the car: 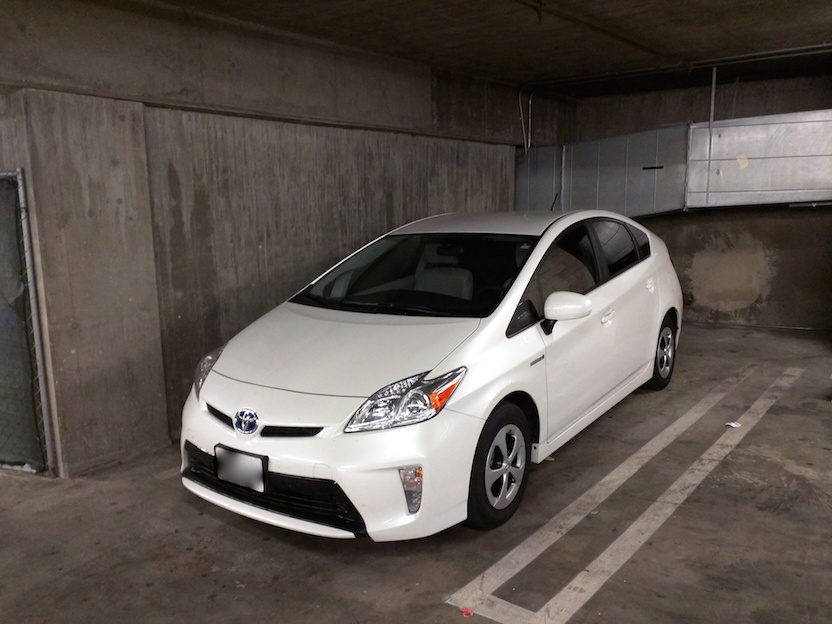 Finding a place to stay boils down to four simple steps for me:

Final thoughts about my journey

I traveled for an approximate of three weeks, and ended up hunkering down in New York City for another month while leaving a car outside the city.

I gave up my apartment back in Bay Area for the duration of the travel, and it feels liberating. It’s comforting to know that one doesn’t need to own a place to live a happy and fulfilled life. Even further, living in NYC for weeks with a single backpack worth of posessions and realising I don’t need anything else was an eye opening experience. 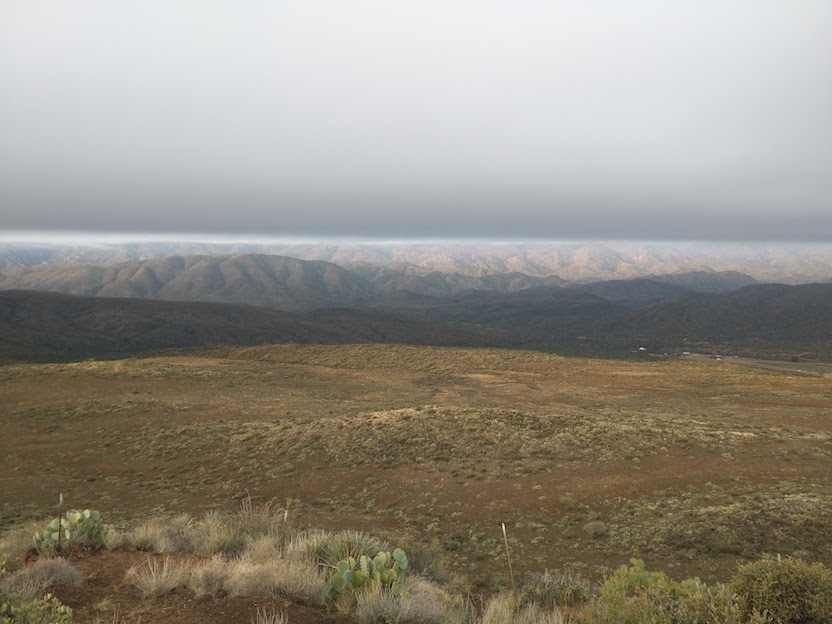 Turns out I really don’t need much stuff to enjoy life.