Before COVID-19 shelter-in-place order came to be, I played Dungeons and Dragons on and off for the past 10 or so years. I unfortunately don’t have the patience to be a great player, but I enjoy running the game – being a Game Master constantly engages me, and I love seeing players have fun and overcome obstacles together.

Having to stay inside I had a prime opportunity to try something new, exciting, and less rule heavy than D&D: that’s how I discovered Numenera. Well, I’ve been familiar with the concept for some time: I played Planescape: Torment – with Planescape being an inspiration for the setting of Numenera, and I’ve recently completed Torment: Tides of Numenera – a spiritual successor to Planescape, which used the Cypher System rules… I’m getting ahead of myself, let me back up. 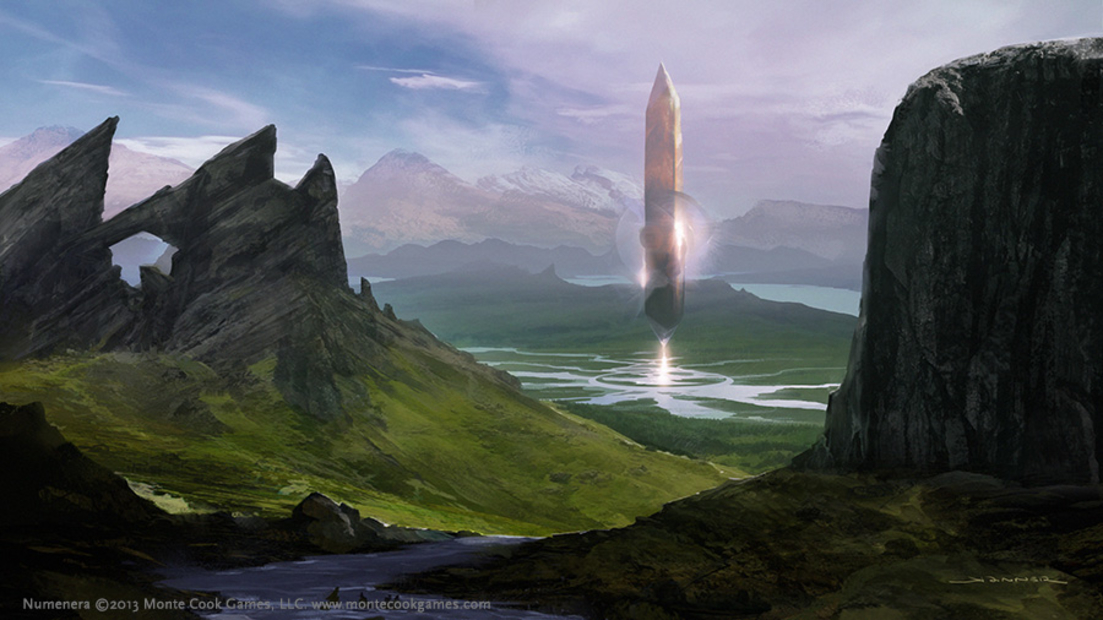 Numenera is a science fantasy tabletop role-playing game set in the (oh so) distant future. The “Cypher System” is a tabletop game engine which Numenera runs on. The system is notorious for emphasizing storytelling over rules, and for usage of “cyphers” - a one time abilities meant to shake up gameplay. Want to teleport? You don’t have to be a level 10 wizard to that. Find the right cypher, and you can teleport, but only once. This keeps gameplay from getting stale, and provides players with exciting abilities from the get-go.

For the past few months I’ve been running Numenera campaign for a group of friends, and we’ve had a blast so far! We’ve been playing over Google Hangouts, without miniatures or services like Roll20: and the game held up well.

It took some time for players to get used to the differences between the systems – and some picked up the new mindset faster than others. Here are the key concepts one had to learn to get used to Numenera. This overview is not complete, but I think it helps.

Numenera is just a catch-all term for weird devices and phenomenon. Now you don’t have to say “that device and/or contraption” and say “numenera” instead. You’re welcome!

Cyphers are items that give characters fun and unique one-off powers. Cyphers are plentiful, and using them like they’re going out of fashion is the key to having fun in Numenera. It’s called “Cypher System” for this exact reason.

Artifacts are a lot more rare, and can be used multiple times (often requiring a die roll to check if they deplete).

Every task in Numenera has a difficulty rated on a scale from 0 to 10. Be it sprinting on the battlefield, picking a lock, convincing a city guard you’re innocent, or hitting that guard on the back of her head with a club. 0 is a routine action, like you sitting right now and reading this, or maybe going over to the fridge to grab a beer. Difficulty 10 is getting the Israeli prime minister to abandon his post, fly over to wherever you live, and serve you that beer. Oh and you’re in charge of Israel now too, your majesty.

Your GM will tell you the difficulty of the task.

The only die players use in Numenera is d20 - the trusty 20-sided die (and that’s already a lie - in a few cases d6 is also used). Multiply difficulty by 3, and that’s the number you’ll have to reach with your d20 roll. Juggling is a difficulty 4 task. This means you’ll have to roll 12 (4 * 3) or higher to succeed.

But what if I’m an experienced juggler you say? I’m glad you asked: you can be either trained or specialized in a skill, reducing the difficulty by 1 and 2 respectively. Juggling for someone who is specialized in juggling is a difficulty 2 (4 - 2) task. You can reduce difficulty by up to 2 levels using skills. There is no definitive list of skills in Numenera, and you can choose to be skilled in anything you want, be it mathematics, dancing, or magic tricks.

Are you juggling well balanced pins? That’s an asset, further reducing the difficulty by 1. You can apply up to 2 levels of assets to reduce task difficulty. Just like with skills, there’s no strict definition of what constitutes an asset. Be creative!

Finally, you can apply effort to a task. Expand effort, and the task becomes more manageable. Effort is limited by how advanced the character is, and starting characters can’t apply more than 1 level of effort.

Hence, a specialized juggler (-2) juggling well balanced pins (-1) and applying effort (-1) reduces task difficulty from level 4 to 0, making it a trivial task – no need to roll to succeed!

Characters have three primary stats - might, speed, and intellect. There’s no health or other resources to track, but your stat pools do deplete. Did you get punched in the face? Deduct damage from your might pool. Exerted effort to concentrate on juggling? Pay the price through your speed pool. Trying to figure out how something works? Reduce your intellect pool.

You use the same resource to exert yourself and to take damage. As your pools deplete, your character becomes debilitated, and once all 3 pools drop to 0 - your character dies. There’s nothing more to it.

The stat pools replenish by resting, and you can rest 4 times a day - for a few seconds, 10 minutes, 1 hour, and 10 hours. When you rest - restore 1d6 + tier (1 for beginning character) points spread across pools of your choice.

Each character also has “edge”. Edge is an affinity in a particular stat, and reduces all resource cost in that pool. If you have edge 2 in might, each time you expand that resource, you reduce the cost by 2. Bashing with your shield costs 1 might? That’s dropped to 0 for you. Moving a tree blocking the road all by yourself will cost 5 might points? That’s now dropped down to 3.

This becomes particularly relevant when applying effort. Applying effort makes tasks easier, but costs points from a stat pool. First level of effort costs 3 points, and any subsequent levels cost 2. Say if you’re trying to climb a tree (difficulty 3) and want to expand 2 levels of effort to make the task easier. That would cost you 5 points from your might pool, and your edge 1 in might drops the cost to 4.

Don’t overthink it for now.

Every Numenera character has a tier, which is akin to levels in D&D. There are 6 tiers, with each more advanced than the last. However, unlike in Dungeons and Dragons, the tiers are not detrimental to character advancement: characters get just as much if not more utility from cyphers, artifacts, and the way they interact with the world.

Experience is given out by the Game Master for accomplishing narrative milestones. Experience is also given during GM intrusions, Cypher System’s signature narrative mechanic. At any point throughout the session, GM introduces unexpected consequences for player actions: a rope snaps, poisoned villain has an antidote, or a previously hidden enemy attacks a passing player. Each time an intrusion happens, the affected player gets 2 experience points - 1 for themselves, and 1 to give away to another player.

GM intrusions allow to adjust the difficulty of the game and introduce fun challenges on the fly. Many GMs already do this in their games, but the Cypher System awards the players experience when this happens, associating unexpected events with positive stimulus.

In Numenera, experience points are a narrative currency, and a way for players to influence direction of the story. Experience is often counted in single digits, and can be spent in various ways:

Once you’ve spent 4 XP to advance your character 4 times, you advance to the next tier. All of the above benefits are equally valuable for character progression - as a die re-roll at the right time, or an ally’s help can make all the difference in a tough situation.

A word about combat

You might notice that I still haven’t brought up combat. And that’s because there aren’t a lot of additional rules.

Just like in D&D, there are rounds. Combat initiative is a speed task, and turns are taken with as much structure as the group would desire. There’s often no need for precise turn order outside of who goes first – the players or the enemies.

Attacking is a task against GM-given difficulty. So is defending. Effort can be expanded to make hitting a target easier. Characters can expand effort to get +3 damage on their attacks per level of effort instead.

Distances are measured as immediate (up to 10 ft), short (up to 50 ft), long (up to 100 ft), and very long. Melee attacks happen within an immediate distance, traveling short distance takes an action, and traveling long distance within a round is a level 4 athletics task.

Combat-related tasks are only limited by imagination. You can distract your enemies, assist your comrades, or swing into battle on a rope yelling “Huzzah”!

Natural 1 allows for a free GM intrusion. Something unexpected happens, and you don’t get any experience for it.

Natural 17 and 18 provide +1 and +2 damage respectively when attacking.

Natural 19 gives the player an opportunity to come up with a minor effect (or inflict +3 damage): some minor advantage which usually persists for a round. Maybe an enemy is knocked back, or a merchant impressed by your bartering skills gives you an extra discount.

Natural 20 provides the player with a major effect of their choice (or up the damage to +4). The cutthroats in a bar spill the location of their next heist, or a enemy gets stunned in battle.

Finally, Numenera and Cypher System are focused on telling great stories, and many rules are deliberately vague and are left up to GM’s discretion. In Numenera, if you wonder if you can attempt some task – you most definitely can try, and good GM will help you fail in spectacular and most importantly entertaining ways.