About a year ago I stumbled upon an article explaining the difference between Vim tabs and buffers. The author emphasized that tabs are merely window layouts, and therefore one-file-per-tab idea I was used to at the moment just wasn’t proper. Instead, author suggested the use of buffer commands to switch between multiple files. I decided to give it a shot, and here are some ideas I would like to share after switching to the use of buffers.

Buffers are open files (they also may not be associated with any files), but they’re not necessarily visible at any given moment. In Vim, windows are not linked to any particular buffer, so you can easily cycle through buffers from within any window.

First and foremost, you probably want to add set hidden to your .vimrc. This option lets you switch between buffers without having to save files.

At it’s basics, you only need few commands for operating buffers: 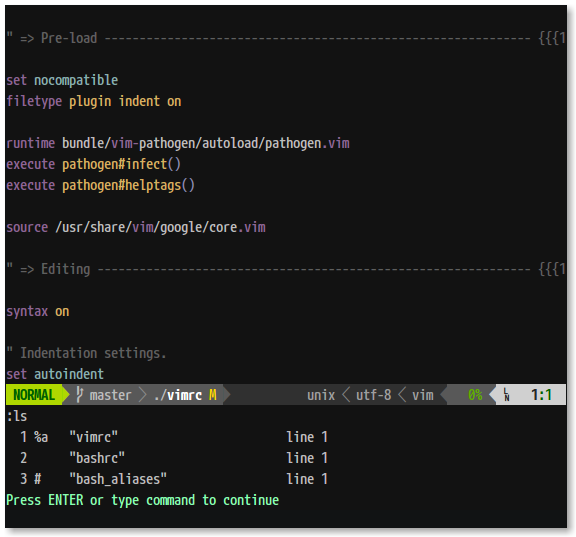 The hardest thing about stopping to use tabs and switching to buffers instead is not having the visual aid: I was used to having a list of files always available at a glance, at the top of my screen. To check what files I’m working on now - I have to hit four keys: :ls (fourth being “Enter”).

Not surprisingly, this taught me to be more mindful about my editing experience. I usually have a clear structure of the files I’m working on in my head. And if the list is getting to long to easily remember, then I’m probably doing something wrong: time to take a break and reset my Vim session.

The experience overall reminded me of my recent switch to blank keyboard key caps: with no inscriptions to aid you, I first felt a bit at loss, especially with they keys I couldn’t find without looking: like function keys or special symbols. But after some time with the blank key caps, I improved my typing skill, and know where even the most obscure characters hide. The switch helped me to improve my typing experience overall.

With Vim, it’s a similar story. After getting past the initial confusion, I achieved high level of awareness about my editing sessions. It didn’t make the editing process any faster, but instead much more satisfying.

But you already new that, since Vim isn’t really about speed.