My Saturday just disappeared, quickly, and barely with any trace. You could find leftover scripts all over my hard drive here and there, all pointing to Hackmud. One moment I had plans for the day, and the next it was well past midnight, I was listening to the 90s hacker movies inspired soundtrack while cracking locks and farming for credits with a script I crafted.

I’ve spent ten hours in game, and it was glorious.

Hackmud is a text-only MUD (multi-user dungeon) set in a not so distant future, where humanity was wiped out by a combination of Welsh Measels, killer rabbit outbreak, and multiple other disasters. All that’s left is a trace of old corporations, dead user accounts, and AIs roaming the net. That’s you, an AI.

Game has a heavy 90s vibe to it, and the atmosphere reminds me of Ready Player One. References to popular TV shows and dial up sounds included.

You start in a training area, a vLAN without access to the rest of the network and other players. You quickly learn all-text interface, and simple bash-like command line - it’s based on JavaScript, with a few syntax changes. Hackmud is very much a puzzle game, and lets you take your time with a tutorial: you’ll need a few hours to go through all the puzzles, cracking locks, installing upgrades, learning about security, and finally - escaping vLAN.

Here are some basics I picked up:

At some point I successfully struggled through the tutorial and escaped vLAN. And that’s where the open-ended social nature of the game shines. You’re thrown into a global chat channel with users trying to trick you into running their malware, players and corporations providing banking services, selling breached account information, locks, and scripts.

The game encourages lying, betrayal, deception, ponzi schemes, money laundering - you name it. And players take advantage of such freedoms to the full extent: 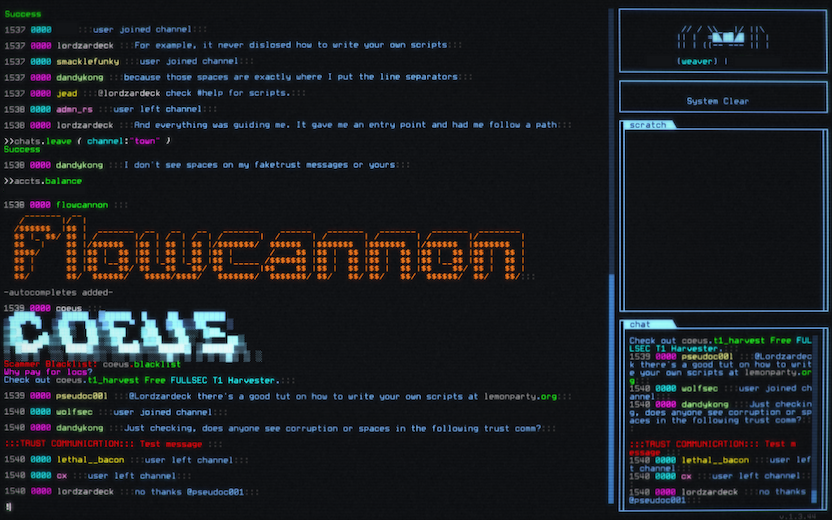 It looks rather confusing, but tutorial prepares you well for the chaotic flow of characters on the screen.

I really wasn’t sure what to do next. The tutorial taught me how to get money out of dead accounts, so I decided to try to find one or two. After asking about in the main channel and being offered a few dozen “risk free scripts to get locs worth millions”, I decided to set out on a search. I looked through a list of scripts.fullsec, and found a few corporations. 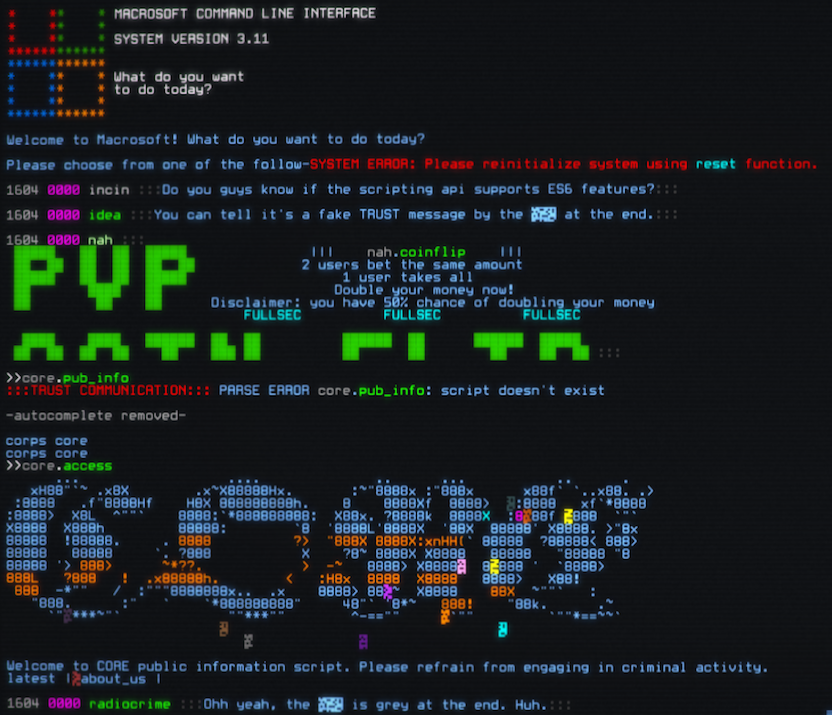 After digging about in their files for a good few hours, I found a way to get to employee registry and get a dozen of dead user locs. The locs were protected by different kinds of locks, and I went through the first batch manually. It took me a long time to get all the combinations and pull out some cash out of the accounts.

I found my second batch of locs shortly after, and decided to try automating some manual attempts through scripting. After struggling with syntax and being aggravated by having only 120 seconds at a time to crack a lock (in line with the 90s feel of the game, one needs to be connected to a “hardline”), I wrote a first sample script, and started to play around with game concepts. 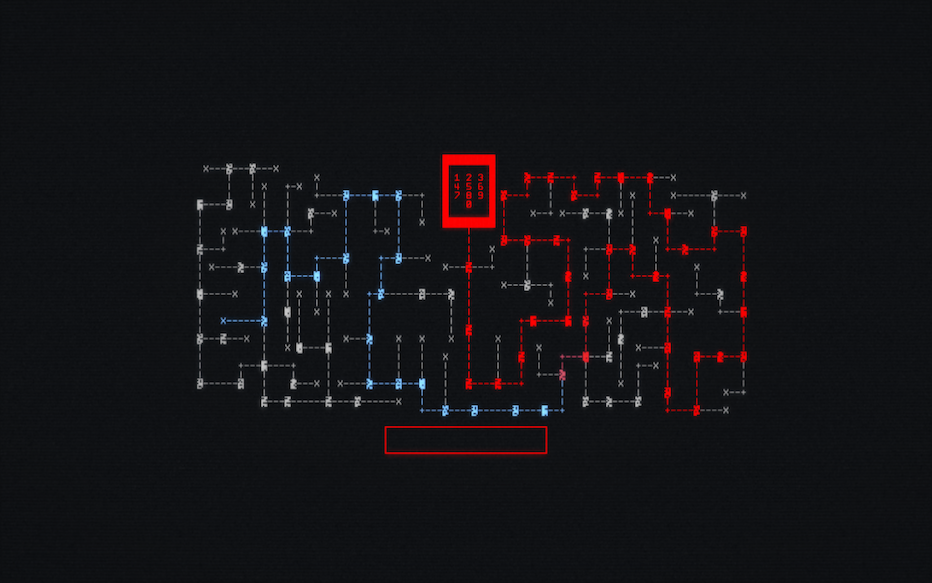 Hackmud is in no way an accurate hacking simulator, but it’s a really fun puzzle game, and it doesn’t make any outrageous mistakes. It allows you to write your own scripts to use in game using valid JavaScript with access to a game library. Game developer (it’s a one person project) implemented his own JavaScript interpreter, so it has bugs here and there - one should be careful using obscure language features.

The worst part about scripting was character limitations: one needs quite a bit of money to be able to install first upgrades, and default limit of one active script and 500 characters per script is straight-up rage inducing. Before getting my first 1MGC to finally upgrade my rig, I wrote a bunch of tiny scripts, one per lock type, struggling to keep to the character limit. I ended up with ugly monstrosities like this, manually passing results from one script to another when encountering multiple accounts:

It was really interesting working with the limitations:

Few more batches of locs later, I was finally able to afford to initialize my system to tier 1 and install upgrades I bought and accumulated from hacking accounts: 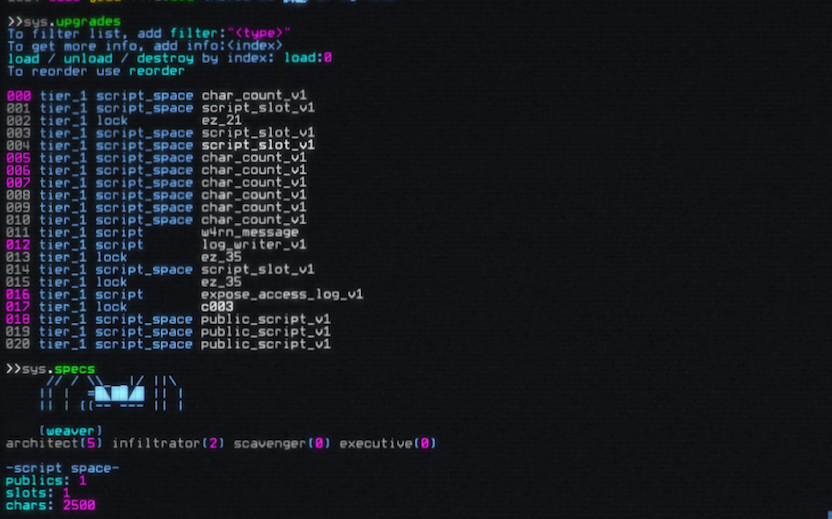 Now I can write all the scripts I want! Excited, I built my first t1 (tier 1) lock breaker, which automatically cracks a loc with any number of t1 locks on it:

Rather rough around the edges, not easiest to read, but it works - and I was really proud of finishing it (and too tired to go back and refactor). With this, next dozen of t1 locs took me a few minutes to crack open. Success!

That was the logical conclusion of my Saturday, and left me feel really satisfied. The game is rough around the edges, and has numerous bugs here and there. But the text-only world of Hackmud is alive and atmospheric, and puzzles and exploration of the derelict world through randomly-generated documents pulls you in, making you lose track of time.