Disclaimer: This post was not endorsed by Pebble, nor I am affiliated with Pebble.

About a year ago I’ve tried out almost all wearables Pebble had to offer at a time - the original, Pebble Time, and my favorite - Pebble Time Round. I wouldn’t call myself a fanboy, but Pebble watches are pretty damn great. 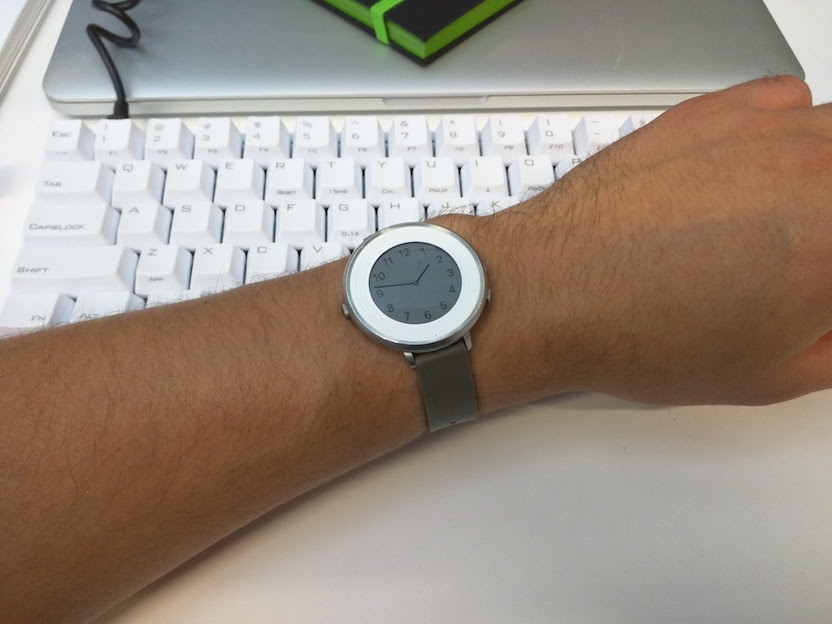 Back then I was on a market for a smartwatch - something stylish, inexpensive, and durable, to show time and notifications. After some research I immediately ruled out all other wearables on the market: some were too much centered around fitness (not my market), and some tried to put a computer with a tiny screen on your hand (I’m looking at you, Apple and Google). I wasn’t interested in either, and I was charmed with simplicity of Pebble.

First, I’ve gotten the original Pebble. I was blown away by the battery life which neared two weeks, beautiful minimalist design, and the absence of touch screen. The last one is probably the main reason why I’m still using Pebble.

It’s a watch, it has a tiny screen the size of my thumb. How am I supposed to control it with gestures with 100% accuracy? Unlike with a phone, I interact with my watch often during more demanding activities - cycling, running, gym, meeting, etc. Having physical buttons doesn’t require me to look at a screen as I perform an action (quick glance to read a notification is enough - I can reply or dismiss without having to look at the watch again).

After using the original pebble for a few weeks I was curious to try out Pebble Time. I enjoyed having colorful display, the battery life was almost as long, and the watch felt smaller than the original one. It was a decent choice, but still couldn’t help but feel like a square digital watch doesn’t fit my style.

That’s when I decided to try out Pebble Time Round. It’s the smallest of the three, and definitely one of the thinnest smartwatches available (at only 7.5 mm). I went for a silver model with a 14 mm strap. Initially there was a lack of affordable straps, but after some time GadgetWraps filled in that niche.

It’s been a year now, and it’s still going strong. Pebble Time Round (or PTR as people call it) doesn’t have the longest battery life, averaging at about 2 days until hitting the low power mode (when Pebble watches run low on juice they only display time). I usually charge it daily, since charging 56 mAh battery doesn’t take long (it gets a full day of use from 15 a minute charge).

PTR is much more a watch than anything else: it looks good, and it shows time. All the necessary things are available at a glance - calendar, notifications, texts, weather, music controls, timers and alarms. I use voice dictation to send out an occasional text.

I work in a corporate setting, with sometimes difficult to manage number of meetings, constant Hangouts pings, and a stream of emails. Pebble helps me easily navigate hectic daily routine without having to pull up my phone or my laptop to look up the next conference room, meeting attendees, or reply to a quick ping.

Due to app marketplace similar to Google Play Store (with most if not all the apps and watchfaces free) I find it easy to customize Pebble based on a situation I’m in. I’m traveling and need to be able to pull up my flight? Check. Need to call an Uber from my wrist? Check. Get walking directions? Check.

To my delight Pebble as a platform is rather close to Linux ideology. Pebble apps are modular and tend to focus on one thing and do one thing well.

Recently a Kickstarter for Pebble 2 has been announced. It’s rather unfortunate PTR is not getting an updated version, but to be honest it doesn’t really need to. It’s a fantastic combination of hardware and software which fills in a specific niche: a stylish smartwatch for displaying relevant chunks of information.